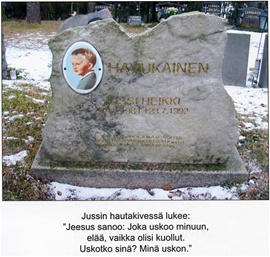 Riistavesi little evangelist is gone, but the gospel is stillRiistavesi has come a angel of the Lord called by the people in heaven him a little 8-year-old Jussi Havukainen through. He had gone to a drunken, saying, "The world does not love you and be your friend, but remember that Jesus loves you! Or Cursing, he said:" Do not swear. But let the blood of Jesus to wash your sins, otherwise you can not get to heaven. "Jussi was filled with the Holy Spirit at age 5 and began a spiritual meeting to speak in a clear case in German, so that the German language was understood to realize. Since that time, he had a burning desire to tell about Jesus to all people. He had asked his parents to acquire spiritual flyers, which he had shared Riistavesi mailboxes. Jussi had bought a bag for it and ordered a big bunch of these tracts. And John had left them to share, after that the Holy Ghost had given him encouragement. For each box they are not distributed, but those in which the Holy Spirit had urged.Two years before his death had been Kuopio, Finland Jussi parents with the spiritual meeting and said that tonight's keynote speaker Roger Larsson speaks of the gospel of John: "There was a man sent from God, whose name was John." This is exactly what happened, a Swedish visitor spoke just the text. Roger Larsson had blessed John's, when the parents UPTIME taken her blessing and said: "This child has a predisposition shoes, but his evankelioimisaikansa is short."Jussi drowned Riistavesi 23.päivänä last June, and her death associated with such a wonderful event that it has touched the hearts of people all over Finland.Hours before John's drowning was observed, drove John's familiar Majoisten Olli collision with a van so that he was knocked unconscious and had to take the ambulance to the PCA of. On the way Olli saw the person is unconscious, a vision in which first became a disgusting-looking horned creature towards him, but immediately after the six-foot angel shining a double-edged sword in hand, drove the devil away. After the angel whisked him to the gate of heaven February, in front of which sat another angel book ahead. The gate was closed and when Olli tried to get in, he did not get portia open. He said to the angel, why can not I go to heaven the angel answered him that "Your time has not come yet, you will return to the earth, but Havukainen Jussi comes here." After a while, Olli saw the two angels carrying John's pearly gates in and closed the gate. Olli ordered an ambulance at 16.10 and the same ambulance drivers were ordered to take Jussi Jussi at 17:10 Kuopio, but resuscitation attempts, Jussi died. Immediately after waking coma Olli told this vision, ambulance drivers, and then proceeded to the hospital to his mother and caregiver. When John's parents checked after his death, the tract of John's case, they found that it was empty. Jussi had completed its work of an evangelist. The Lord had brought home with servants.While John is out of the echoes of the gospel call even today. Here Jesus says, "I love you, let me wash away your sins and regenerates you to a living hope. Only I will be able to give your conscience a joy and a peace that the world can not give." But do not move an improvement until later, you do not know how long the Lord will call.Jari Mud (North-Savo-Journal, September 92)